There are some DynaMaker basic concepts that are good to know beforehand. Although they are not mandatory to learn before the tutorials, they will help you to understand them faster. But don't worry they will be referenced many times throughout them. If you are completely new into programming and DynaMaker, this is your place! The concepts that are reviewed here are:

Once you have created an account at app.dynamaker.com/register, you can create your own teams and be a member of other's at the same time.

If you go into your team, you will see all the apps that you have created in the team. Then there are 2 dashboards:

When you go into one of your teams, you find the following: 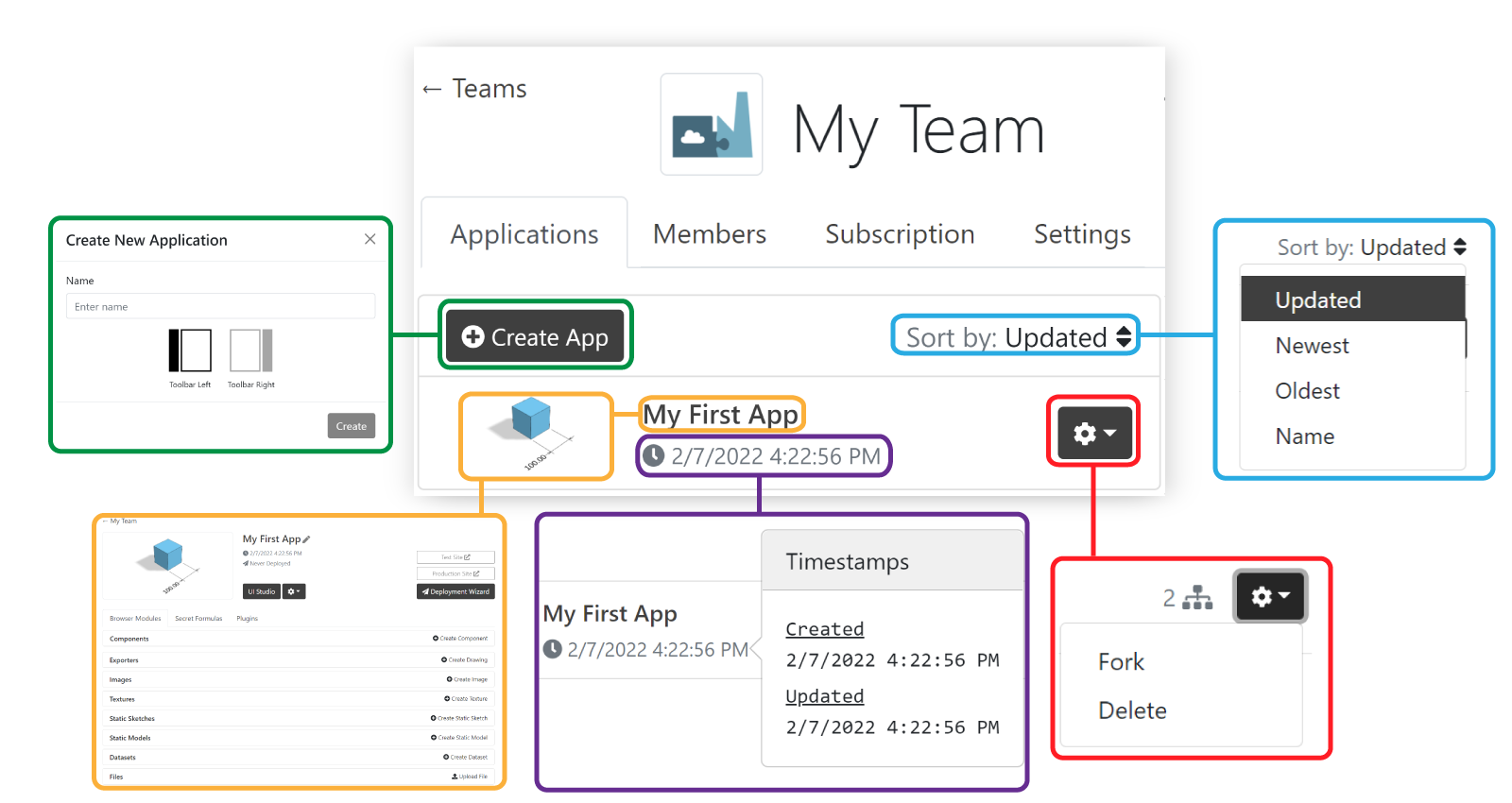 Here are the main features of your team dashboard, starting from top-left counter-clockwise:

Within each team, you can create all the apps you want in Applications, invite your colleagues to your team in Members, review your DynaMaker Subscription and more.

When you go into one of your apps, you find the following: 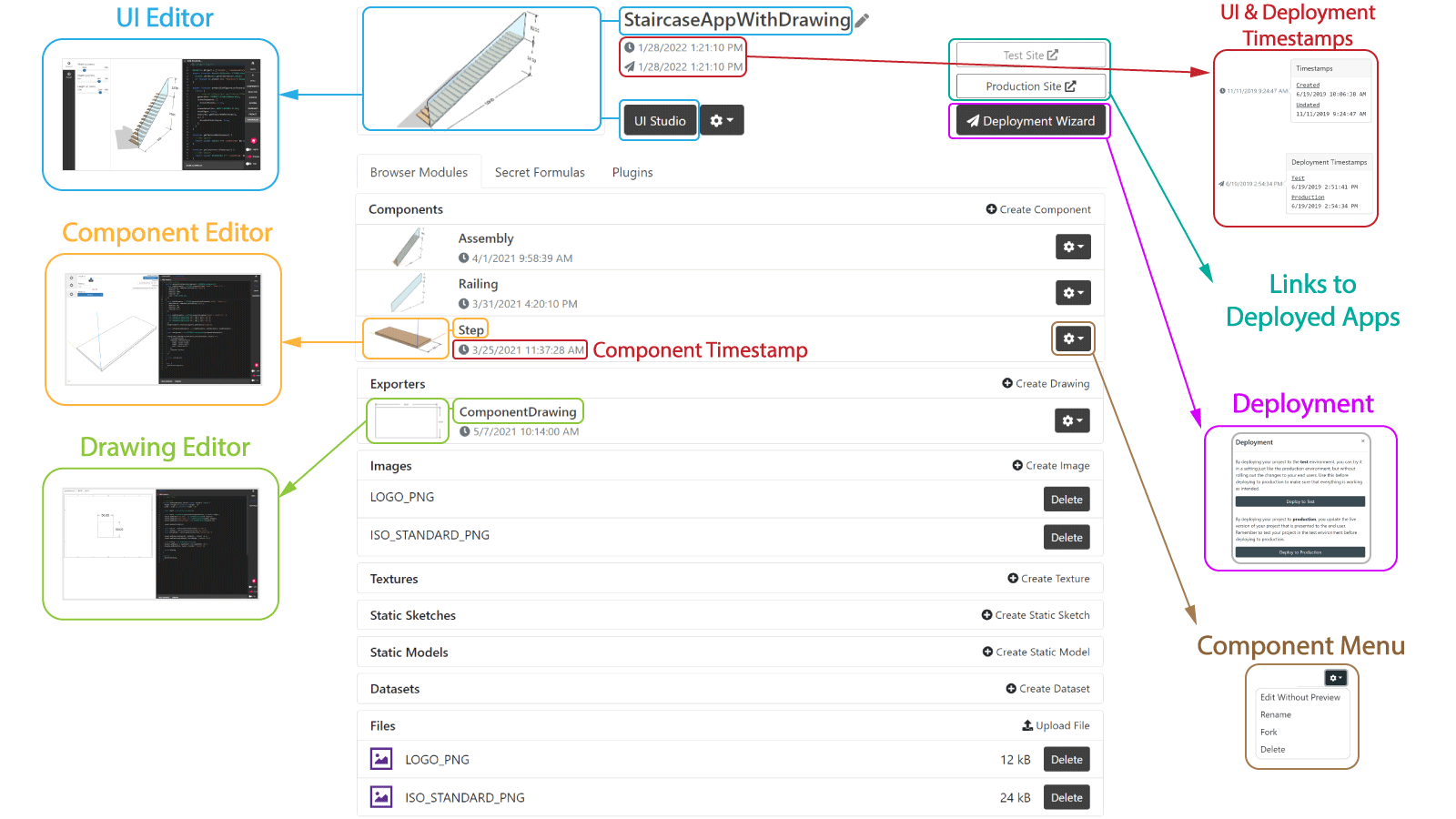 Here are the main features of your team dashboard, starting from top-left counter-clockwise:

So what do I need to care about when I start a new project? Just these 5 things:

This is what your customers/users will interact with when they visit your application. Through the UI Editor you write all the logic needed for the app used by the end customer. It can include as many components as needed, for example:

Optionally you can autogenerate drawings for your app. Including a preview section, you can import your components to see a temporary drawing (so you don't have to go back and forth to the application to test it), add your customized details and make it ready to use in your app.

Optionally you can add extra files to complement the app. Pictures of your company logo for the drawing, tables with a lot of properties to create parameters with dynamic options, or predefined models and sketches that remain static in your application are some of the examples that you upload and use in your UI and components.

When you've reached the point in your project when you want to share your application with someone else, you can deploy your application. You can think of a deployment as taking the current state of your application and saving it on a website that anyone can access. Of course, the deployed application could also require the end-user to authenticate before being able to access it.

In the Deployment Wizard, you find two buttons:

Below is an example of a deployed app. Try it out, it is interactive!

Although DynaMaker can work in different web browsers, Google Chrome is preferable when both developing and using the applications to get the most out of the features, like the correct style of the user interface. Developing is only supported from a desktop environment while the deployed applications can be used from a mobile device such as a tablet.

We use TypeScript as our language of choice for creating the dynamic tools. TypeScript is a typed version of JavaScript and is a well-established and documented language for building web applications.

Our tutorials require a very basic level of programming and we try to use simple and understandable functions for beginners. Even if you never programmed before or you forgot the programming lectures you attended years ago, don't worry, you will not have any problem. For those who are new to the language, we show some of the basics you need to know for starting with TypeScript:

These are the basics and of course there is more! Here are some other examples you can learn from:

Don't forget to check any open documentation available in JS, including the try-it-yourself one. Otherwise, we'll be happy to help you find resources so the language is not a problem!

In DynaMaker there are 3 different editors:

Each one contains all the logic needed to generate the components, UI and drawings (if any). In these subsections it is explained how the tabs within those editors are related and how are connected. Although here they are not explained in detail, it helps to have an overview on how things are connected. However, you will understand better how these are connected while doing the tutorials. Typically this how the skeleton of most of the apps look like and can include:

Although this is the most common example, you can define the complexity of your app how you want. For example

The Component Editor consists of multiple tabs that are meant to be connected in a ideal or recommended way. These tabs are:

Of course there are other situations where some other connections could exist:

As for the interface, there are 3 things to consider:

The UI Editor consists of multiple tabs that are meant to be connected in a ideal or recommended way. However in the default template, most of these tabs are empty and therefore not connected. These tabs are:

Similarly as in the Component Editor: 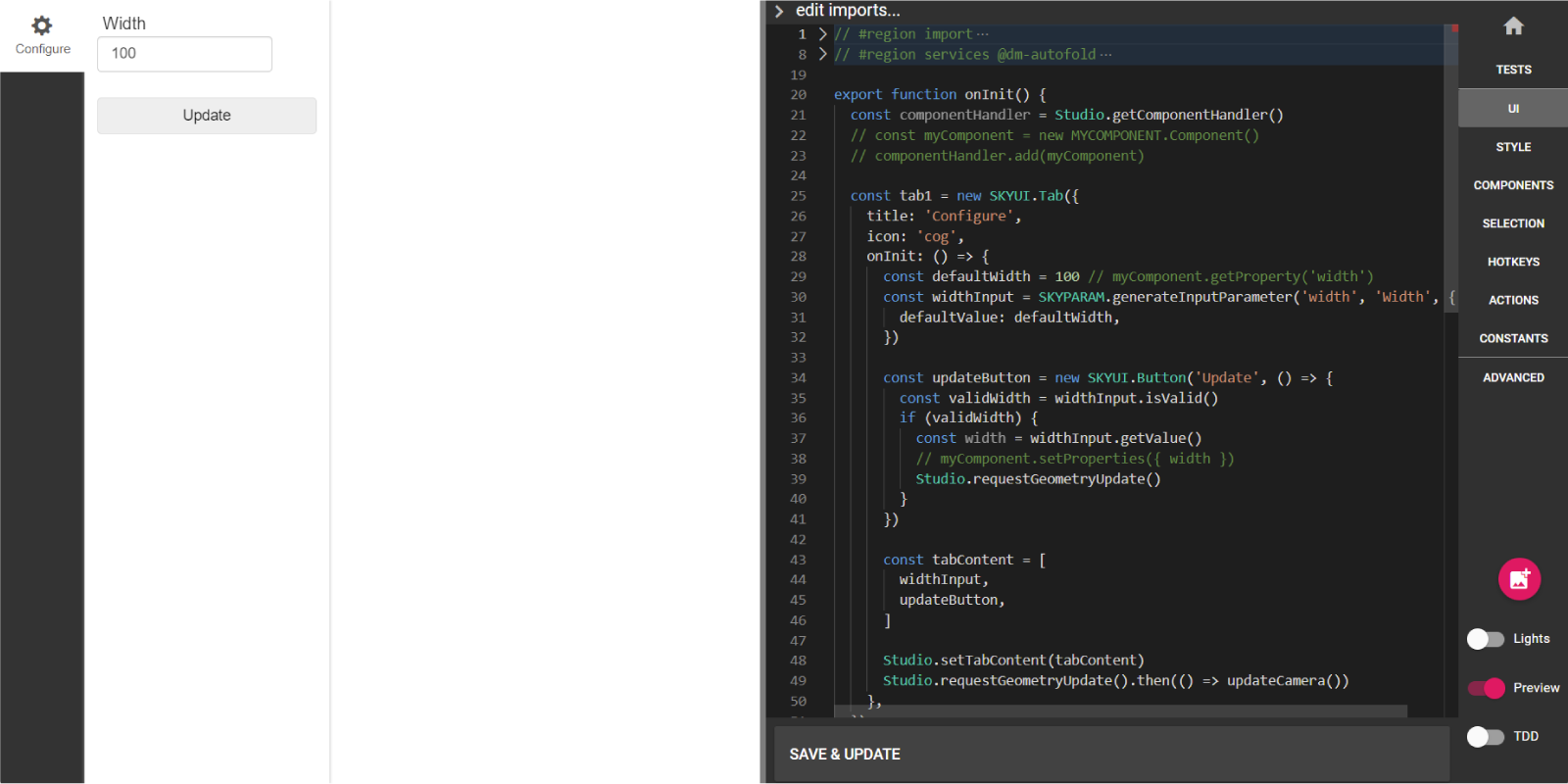 The Drawing Editor can be thought as a simplified version of a component that consists of a few tabs:

Similarly as the Component Editor, the Drawing Editor also has support for presets, which can be found in the top-left corner too (orange in picture):

In Typescript there are a few pre-built functions that are useful in some cases. For example, we can write the number π through the Typescript library Math like the following with some other useful mathematical functions:

However, these are very limited and therefore DynaMaker would lack a lot of functionalities. In DynaMaker you can make use of our custom libraries, which include a lot more of pre-built functions to avoid headaches with the maths and much more. There are 8 different libraries depending on what you want to do:

Even though they have a lot of information, we recommend you to look at these libraries once you have completed the tutorials. By then you will have a better understanding of the potential of DynaMaker as a tool, and you might want to look at the full potential later on by digging into the libraries and see what they have.

Since we are adding content constantly, it would be impossible to learn all this functions. In DynaMaker the Code completion will help you to complete what you are about to type or even explore what the libraries offer. 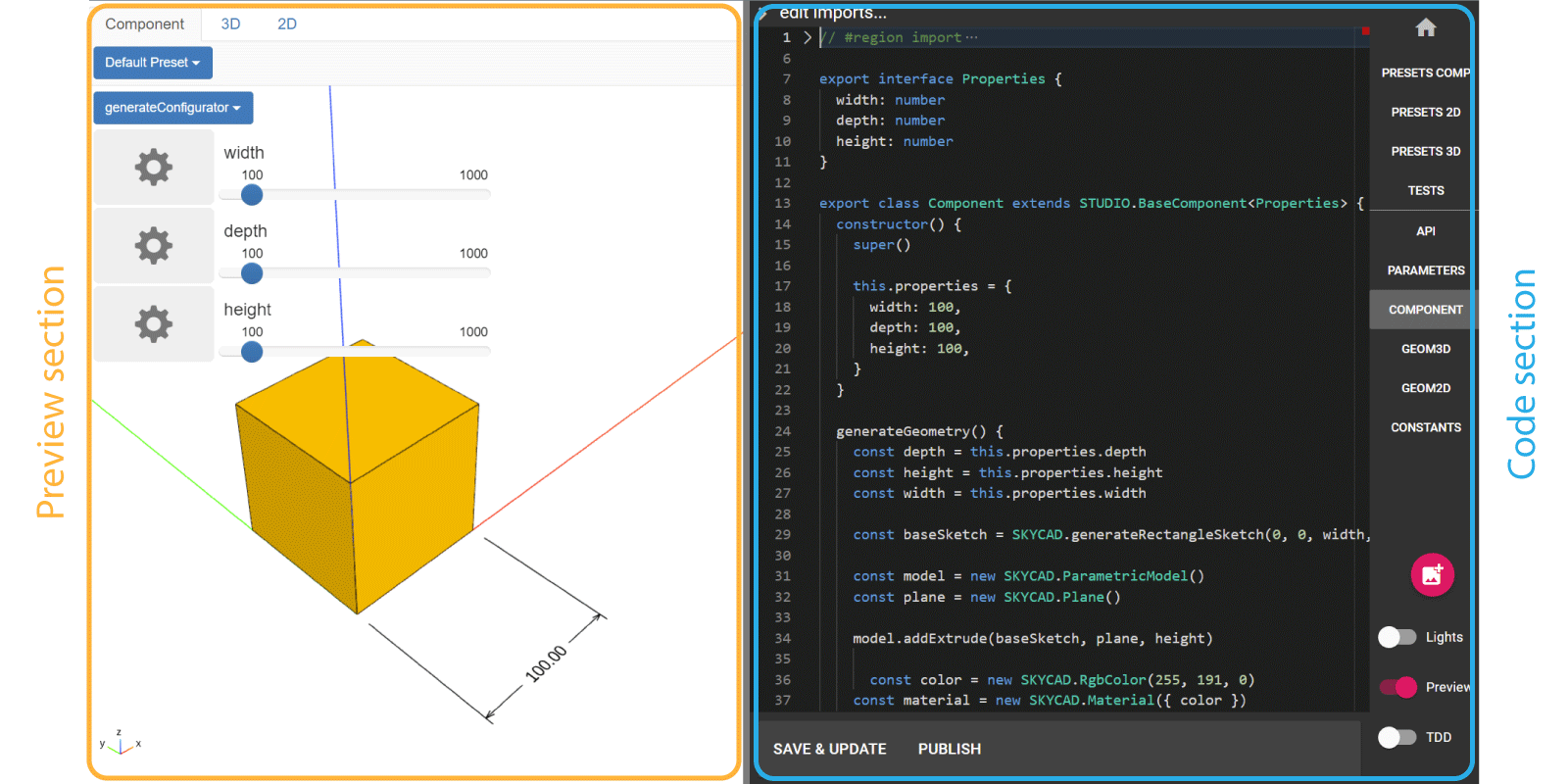 It follows the classic and simplified CAD camera buttons. Considering the camera target the center position of the preview (on the ground at (0,0,0) by default):

It is also possible to rebind these buttons with your own preference. Check this section to see all the camera settings.

There are no default keyboard shortcuts. However, you can create your own with the behavior you want. We call them hotkeys and they are covered in one of the tutorials.

Remember also that F12 opens the browser console for debugging.

It follows the common keyboard shortcuts for a programming language editor.

Redo, Undo And Save & Autoformatting​