It is common to want to add some files from DynaMaker to another system, for example a CPQ, when a configuration is completed or a quote changes status. While using the client-side postMessage API is the most simple way of sending quotation files between DynaMaker and your other systems, it is not always possible to use. If the files need to be generated and sent at some point after the user has ended their browser session, Quote File Service can be used to generate the files on the server via a simple REST API.

The first step in setting up QFS for your DynaMaker application is to enable its plugin in the dashboard.

When the plugin has been enabled, we can access the PLUGINS.QFS namespace which has a function called onJobRequest. We will go through what a job is in more detail further down on this page. As the first argument we specify which task we want to implement. This is just a name that we choose, for example generate-pdf. The second argument is a callback function that returns a base64-encoded data URL for that task.

In the example code below, the task is generate-pdf and the function uses the DynaMaker Drawing class to generate a PDF as a data URL.

After the plugin has been enabled and at least one task has been implemented as per the section above, we can use the Quote File Service REST API to create jobs. A job is defined by a task, for example generate-pdf, and some configuration data.

To authenticate your requests to QFS, copy the API Key from the QFS plugin in the dashboard and include it in the header of your requests. Be mindful of how you store and share your key!

To create a job, send a POST request to https://qfs.dynamaker.com/jobs with your API Key in the header and with the following data in the JSON body:

By doing a GET request to the url specified in the response of the POST request above, we can check the status, which can be one of the following:

The response will be the PDF data.

By including a callbackUrl when creating a job, QFS will send a POST request with the result to that URL when the job has finished. If the job was successful, QFS will include success=true in the URL parameters and the body be the data produced by the job. If there was an error, success=false will be sent instead and the body will be a JSON object including a message property.

Example where task name was misspelled​

The REST API described in the section above can be used together with no-code solutions such as Microsoft Power Automate for easy integration.

To help you get started using QFS together with Elfsquad, we have created a template flow that you can use. At the very least, you will have to update the "Flow Settings" block with your specifics to get it running. When that information is filled in, you may of course modify the flow freely to make it suit your specific needs; please refer to the official documentation for that. 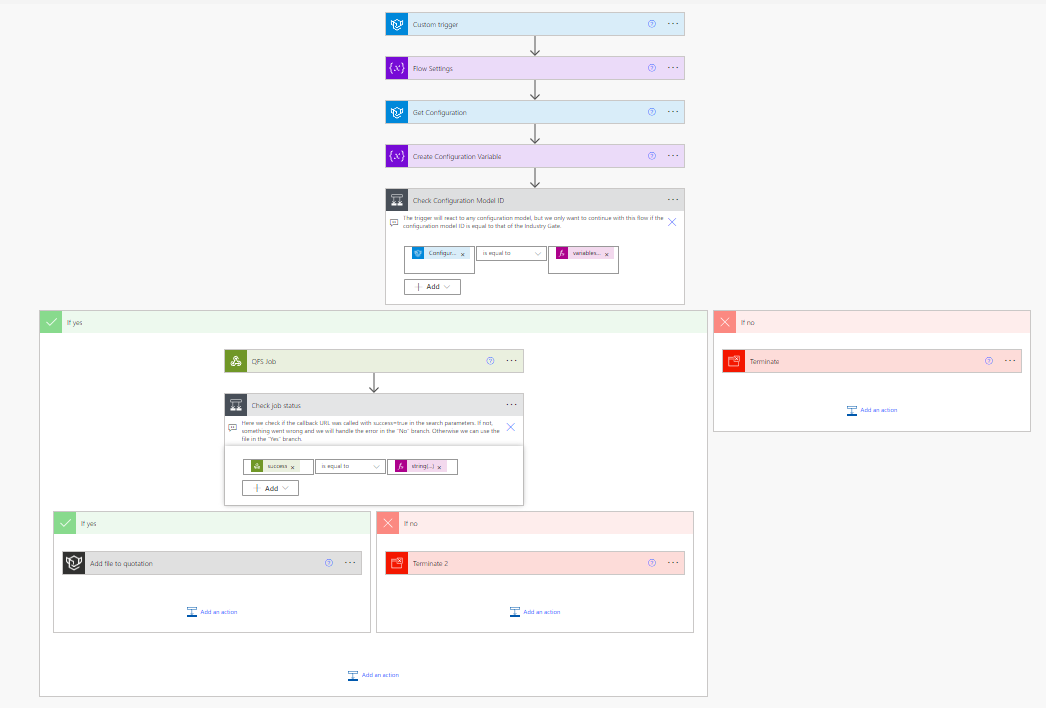 Here is a step-by-step guide on how you can get started with the template:

As usual, feel free to send an email to support@dynamaker.com if you get stuck or have questions.